LB-102, also known as N-methyl amisulpride, is very similar to the marketed antipsychotic amisulpride and differs by only one methyl group (CH3). This slight addition to amisulpride should reduce the molecule’s polarity and increase passive diffusion across the blood brain barrier.

In rodent studies, a significant amount of LB-102 is metabolized back to amisulpride such that both compounds make significant contributions to the therapeutic effects observed. Since humans have not been dosed with LB-102, it’s difficult to predict how much amisulpride will be produced by human metabolic processes. Importantly, LB-102 is a potent antagonist at D2, D3, and 5-HT7 receptors just like amisulpride, so LB-102 is not dependent on metabolic conversion to amisulpride to exert an antipsychotic effect.

One of the major issues with amisulpride is that, unlike other antipsychotics, it does not readily diffuse across the blood brain barrier.  This barrier protects the central nervous system from exposure to chemicals that may get into the bloodstream including drugs that are intended to treat psychiatric illnesses.  Amisulpride’s limited ability to diffuse across the blood brain barrier means that large doses must be taken to get even a tiny amount of drug into the brain. Our scientists determined that a well-placed methyl group would increase the amount of drug crossing the blood brain barrier without dramatically changing the compound’s pharmacology and maintain amisulpride’s unique anti-psychotic properties. Thus far, animal studies have shown that LB-102 gets into the brains of rodents better than amisulpride.

LB Pharma has conducted a number of proof of concept studies in rats and mice to determine if LB-102 has desirable properties as an antipsychotic.  Specifically we conducted a Microdialysis study, a Novel Object Recognition study, a Catalepsy Bar test, an Amphetamine Induced Locomotor Activity study, a Maximum Tolerated Dose study, and others. Data from these studies were presented in a poster at the September 2017 30th European College of Neuropsychopharmacology and the full poster can be accessed here.  Amisulpride was used as an active comparator in all of our preclinical studies and was compared to LB-102, a racemic mixture of N-methyl amisulpride, and LB-103, the pure S-enantiomer of N-methyl amisulpride.  LB-103 is not currently in development as it is not an antagonist at 5-HT7 receptors. In all of our preclinical studies to date, LB-102 has been shown to be equal or superior to amisulpride.

The Amphetamine Induced Locomotor Activity Study measures the dopamine blocking potential of a drug in rats that have been given a dose of an amphetamine which causes the animals to become much more active than normal.  This increased activity is measured by photocells placed a certain distance apart in an open field arena and the data are expressed as Total Ambulatory Distance in centimeters. By simultaneously comparing the distance traveled by rats dosed with amphetamine plus antipsychotic to rats dosed only with amphetamine to rats dosed with only an inert vehicle containing no drugs, one can determine a group of drugs’ relative dopamine blocking (antipsychotic potency).  In the chart below, LB-102 was statistically superior to amisulpride in the Locomotor Activity study and significantly decreased the total ambulatory distance traveled to 5,000 cm compared to 20,000 cm in the amphetamine only group and 7,500 cm in the group treated with amisulpride. By comparison, rats treated with the inert vehicle traveled approximately 2,500 cm while rats treated with amphetamines and a very high dose of risperidone as a positive control were nearly incapacitated. 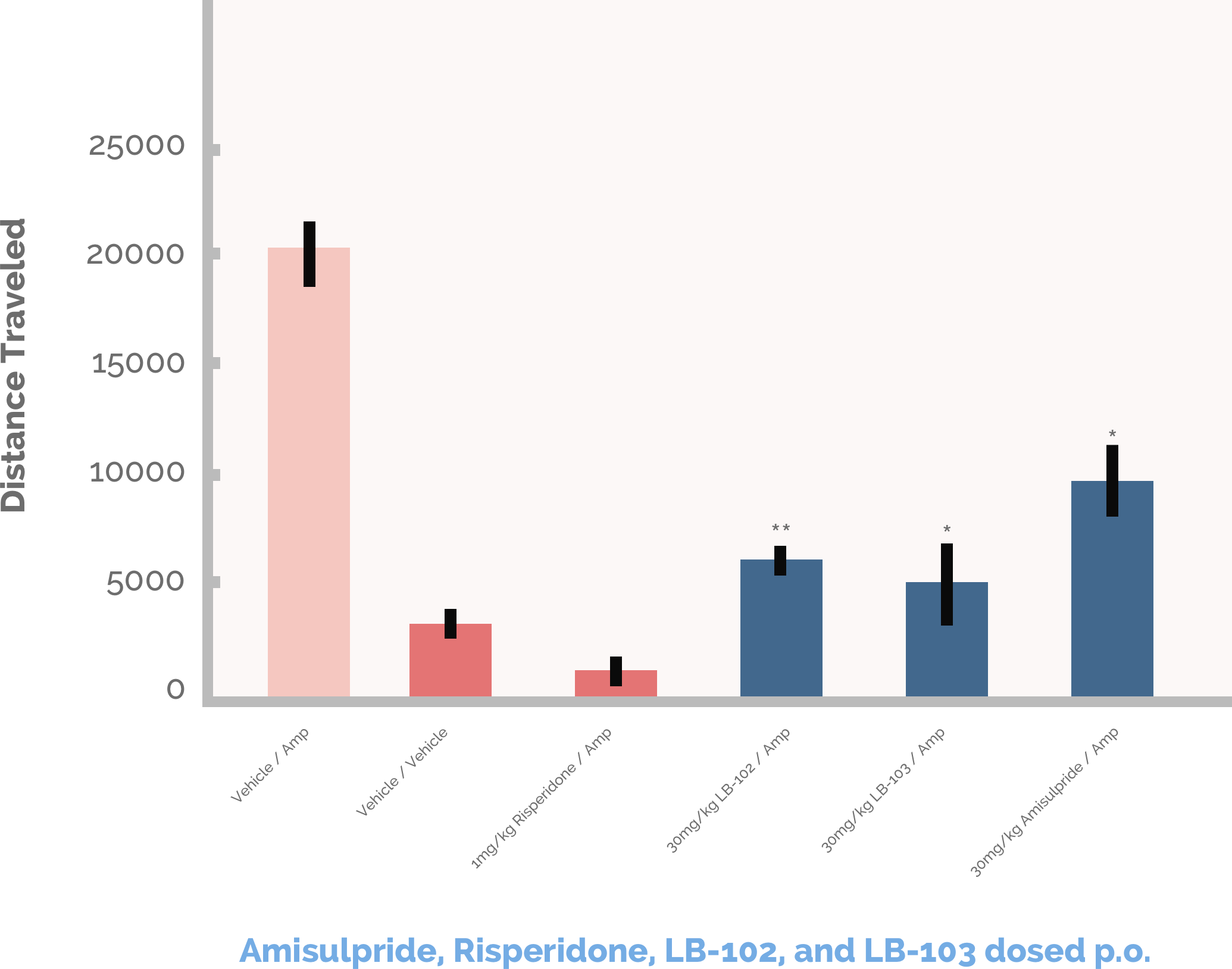 Another important study to determine the usefulness of a potential antipsychotic is the Catalepsy Bar test.  In this study, a rat’s paws are placed on a small bar and the amount of time until the rat lets go of the bar is measured.  Potent dopamine blocking antipsychotics can cause muscle rigidity that resembles Parkinson’s disease in humans; rats experiencing this side effect would have a very difficult time letting go of the bar.  This group of Parkinson’s like side effects is referred to in the scientific literature as Extrapyramidal Symptoms (EPS) but could also be called catalepsy when severe. These side effects are very common with older drugs like haloperidol but much less likely in second generation antipsychotics like olanzapine, risperidone, quetiapine, amisulpride, and others. In the catalepsy study carried out in rats for LB-102 and LB-103 in comparison to amisulpride, doses equivalent to several times the maximum human dose were used and no catalepsy was observed. 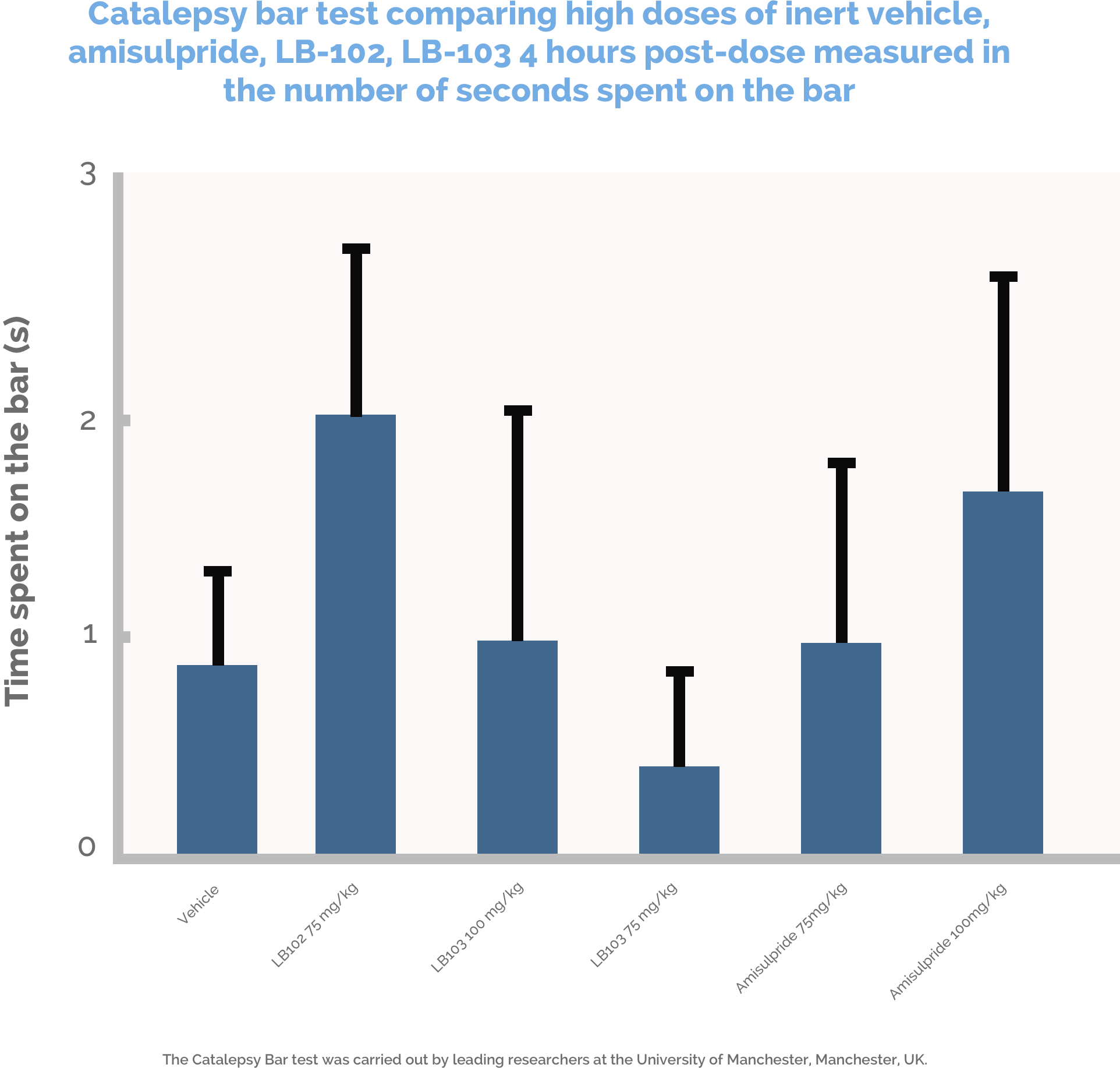